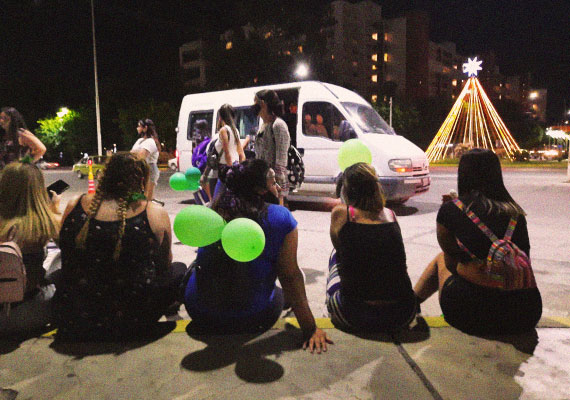 Argentina’s Congress legalised abortions up to the 14th week of pregnancy on 24 January 2021, in what was a ground-breaking decision in a country that has some of the world’s most restrictive abortion laws.

This is a big deal.

Green wave activists have been protesting the law since 1921. In fact, the country came very close to passing the abortion bill but were defeated by a small margin.

This victory brings renewed hope for a positive impact in other Latin American countries. Currently, countries like El Salvador, Dominican Republic and Nicaragua continue to see abortion bans. In countries like Cuba, Uruguay and certain parts of Mexico, an abortion is only permitted in specific cases and each of these countries have their own laws as to how far along a pregancy is an abortion considered legal.

We took this momentous occasion to have a heart-to-heart chat with Melisa Trad Malmod, WFD’s Latin-American Consultant - on what this means from the perspective of someone who’s born to this soul and has seen the many years it took for this moment to come to life.

1) Hey! We’re so happy to have you on-board as our Latin American Country Consultant. Walk us down memory lane - what was it like growing up in Latin America as a young girl?

Thank you very much. I am really happy to be part of this community.

I was born in San Juan, a small city located next to the Andes Mountains. This has many implications for the kind of life you will be able to live. On one hand, Latin America remains the most unequal region in the world. On the other, there are so many limitations and doors closed when your existence does not take place in the capital city... We actually have a saying in Argentina that could be translated as follows: “God is everywhere, but his office is in Buenos Aires”.

Melisa Trad taking a moment to capture the landmark victory

In this context, I have been privileged. Even during tough economic times, my parents always found a way to put a plate of food at the table. I was able to study at University thanks to an educational system that is free for all. I have met people along the way that helped me get closer to the person I want to be. I am aware of the advantages and disadvantages created by how my social and political identities intersect, but I do believe that no one is really free if others aren't.

2) Did you witness the green wave revolution growing up?

We are the green wave revolution. The fight for abortion precedes the green wave, as part of the demands of the women who came before us. Their legacy is a torch that was passed on to us and we turned into what the world today calls the “green wave”.

The women of Argentina showing up in solidarity

I was a feminist before anything else. Injustice always made me angry and probably because of being a woman, I could empathize strongly with so many of their horror stories. When I grew up, I understood that things were like they were because there was a system that allowed them to happen.

By that time, I was already part of different NGOs that allowed me to start moving, to feel that I was doing something about it. Our individual efforts were later united in the streets, under a color, a motto, and a series of steps to follow.

3) Was there an event that encouraged you to become a sexual and reproductive rights advocate?

In the year 2006, a journalistic investigation demonstrated that the Health Minister of my state wasn´t distributing the intrauterine devices that were sent from the National Government for public hospitals. The minister, a recognized supporter of Opus Dei, considered that this was an abortive method. Thus, 5063 units of this contraceptive method were kept out of the reach of thousands of women because of the religious beliefs of one man.

At the time I was 15 years old. That was my first encounter with a painful reality: that women were not considered full citizens, that there was still a long way to go. I was up for the challenge.

4) Do you remember where you were when the landmark victory was announced?

How could I forget? It was around 4 am. I was in the park, exactly in front of our State Congress. This was the place that we had chosen to listen to the debate that was happening at the Senate in Buenos Aires, the capital city. This image was replicated in every corner of Argentina: a huge screen displaying the debate, a stage for art performances and thousands and thousands of women and girls wearing our green scarves

We had been there for maybe ten hours already. People would come and go according to their work or school schedules, or the time to pick up their babies. It was not our first time. Year after year, we had repeated the same ritual. The difference? This time, when the voting closed, the screen turned green, a scream was heard and my friend locked me in a hug full of tears. We had achieved it.

5) What do you believe the biggest barrier to abortion access is for women in Argentina?

As in any recent law, our challenge now is to ensure that it does not become a dead paper. There are still many barriers: the risk that conscientious objection ends up denying women an acquired right, for example, is one of the main priorities we have as a movement right now. This goes hand in hand with the fact that, in a country as big as Argentina, unequal access is a problem.

However, I also believe in the strength of our organizations that were there for women long before the State decided to recognize clandestine abortions. These organizations are the ones that still accompany pregnant persons in the process of deciding whether or not to get an abortion, that fight stigma -which is another battle yet to win-, that will be there whenever the law is not reaching everyone that needs it. Congress passed the law, but we made it happen.

6) What does this victory mean to the women of Argentina?

For women in Argentina, it means we are a little bit closer to what freedom should feel like. We can now take decisions without fear; we can speak about our experiences without the need for courage; we can choose when, how and if we want to have children.

The street were green with slogans reading “Abortion Now”

I am confident that our daughters, nieces, and grandchildren won't even imagine this was a struggle. They will view abortion as just another human right. And sooner than later this reality will also be true for other countries in the region. I don't think it is a victory only for Argentina. We call it the “green wave” because it really feels like one. And a wave does not distinguish borders.

Melisa Trad Malmod works as a Latin-American consultant for Women First Digital (WFD). She is an Argentinian journalist and foreign correspondent, specialized in Gender, Peace and Security.

Stay tuned for more heart-to-heart conversations with abortion activists and allies from across the world.

Author’s bio
Sneha Nair is the Global Communications Officer at howtouseabortionpill.org. She lives in Mumbai with her four house plants.