An Interview with an anti-abortion turned pro-choice feminist 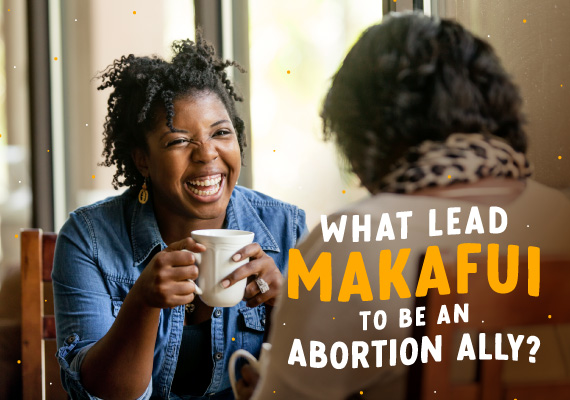 An Interview with an anti-abortion turned pro-choice feminist

Enu: Hello! Thanks so much for joining us for this discussion! Would you like to start by telling us a little bit about yourself?

Makafui: My name is Makafui, and I consider myself to be a feminist. I work in a software company in Accra, [Ghana] as a marketing executive, and I also do some creative writing in my free time. I definitely consider myself pro-choice. I believe that women should be given the option to choose what they want to do with their own bodies.

Enu: It is really great to have you share your story Makafui, thank you. So, what was your opinion on abortion before you became pro-choice?

Makafui: I used to believe that life begins at conception, which I don't anymore. And I believed that instead of having abortions, women should be given other options, for example, adoption or financial support, so they could have the children.

Enu: And what do you think informed this decision to be anti-abortion? What were the factors in your background, and how you grew up that affected your perception of this?

Makafui: So I definitely grew up Christian, so you know, in church, you learn all these things. It wasn't something that was focused on as much when I lived in Ghana, but then when I moved to the US, and I was going to church, there was a lot of, “we need to protect

life at all costs”, messaging. So it definitely had me thinking abortion is wrong in every sense.

Enu: How did your anti-abortion opinion play out in your socially and how would you react if you heard that someone had an abortion or was considering an abortion?

Makafui: I would say thankfully, for them, I never had to interact with someone who was in that position. So I never had to impose my beliefs on someone else. But, I mean, it was definitely mostly in conversations with like-minded people. I know that, at that point in my life, if I had ever come across someone who was talking about wanting an abortion, I would have been against it. I wouldn't have felt that it was in my power to change their mind, but I definitely would have held negative feelings towards them for doing it.

From anti-abortion to pro-choice

Enu: What was the turning point for you? How did you navigate coming from being anti-abortion to being pro-choice?

Makafui: A lot of things changed at once. I wasn't as religious anymore, because of things that had happened in my life. Then I started reading more feminist literature and started engaging with more feminists. So my mind was changing around the same time as my community was changing, and that kind of affected how I felt about a lot of things. I realized that it didn't really make sense to me to say that life begins at conception. If I had been a Christian, it still wouldn't make sense for me to impose my beliefs on someone else. It doesn't make sense for someone's religious beliefs to influence the law to that extent.

That became, the sticking point for me where it's, even if I'm religious, why should my religion make that decision for everyone?

Enu: Was there any internal conflict as you were trying to put your thoughts together on this newfound perception, or did you have struggles, your family, friends, and community?

Makafui: There was a bit of pushback, like there was a bit of internal struggle, because I grew up in this religion for so long, and all of a sudden, I'm kind of pushing back against all these things that I've been taught to believe. And I definitely felt like maybe I was compromising too much. But then I put myself in that position of, if it were me, I wouldn't want someone else to be making this decision for me. And at that point, I also realized I didn't want children. I had to make that decision of, if it were me, I would probably have an abortion. So why would I judge someone? I had to make peace with that, so I can't judge others for doing it.

In terms of my community, there wasn't a lot of pushback. These aren't topics that older people like to talk about. So I haven't really had to talk to my older family members about it. But with my friends, people who grew up with me and who were in the same Christian community, we've kind of grown together. So it hasn't really been an issue.

Enu: So would you call yourself a safe abortion advocate here in Ghana?

Makafui: Absolutely. I engage a lot with people when it comes to birth control. Even with people who aren't part of the feminist community, I make it known how I feel about these things. And if someone ever needed help, especially in my family, they could absolutely come to me and I know that, okay, this is where you need to go like, this is what you need to do. And especially in a family that is still very religious, I am trying to be a safe space for my younger cousins. So that they know that, you know, they're someone they can talk to who wouldn't judge them and who wouldn't snitch to their parents.

Enu: What do you think we can actually do surrounding the topic of safe abortion? What kinds of messages should we be putting across to try and change the narrative surrounding abortion?

Makafui: I think that we need to have more conversations on all class levels. Because I think

when it comes to advocacy, we tend to leave some people out of the conversation, or like people in white areas who are so set in their beliefs. But I also think that it needs to start with men. And that doesn't sound like it makes sense. But in so many parts of this country, it is the men who basically have control over these things. They're the ones who decide that I want this number of children, even if they have no intention of taking care of the children. So if we want to have these conversations, we need to start with them, we need to start getting them to understand why women need control over their own bodies. So, as much as we're fighting for ourselves, we need to engage men.

Enu: So my final question would be: if I was a young woman and I was anti-abortion or I had that anti-abortion opinion, what aresome things that you would want me to consider?

Makafui: I would ask you to think about why you are pro life. What are the reasons? What did you learn that brought you to that decision? And have you thought about the implications for yourself, or how being anti-abortion affects everyone else? If you being anti-abortion comes from a place of religion, do you think it's fair for the rules of your religion to be placed on other people, even if they don't follow that religion?

And I would say, think about your body. Think about how it would be if you were to end up pregnant? Are you in a position to have a child?

If you're not, do you think that means that you're not supposed to have sex? So basically, just ask yourself all these questions, and try to understand why you've come to the conclusion you have.

Enu: Thank you for that insight.

So maybe some final parting words: what are some feminist groups, you're part of for a young woman reading this from Ghana who might want to get involved with feminist movements. Is there a way they can get in touch?

So I would say Silent Majority, Ghana is one group that you could get in touch with.

There's the young feminist collective as well, and all of these groups are on Instagram and Twitter, so you could definitely reach out to them. And there's also the Nameless Campaign, which I'm a part of, again, on Instagram and Twitter. And, yes, just aside from these groups, I would say look for friends, or even just, you follow conversations on social media, and you will meet other feminists who you're able to interact with.

Enu: Thank you so much for this wonderful interview Makafui. It was a pleasure speaking with you!