Legal abortion in Mexico: Decriminalization in Hidalgo, Veracruz and the big picture for the rest of the country 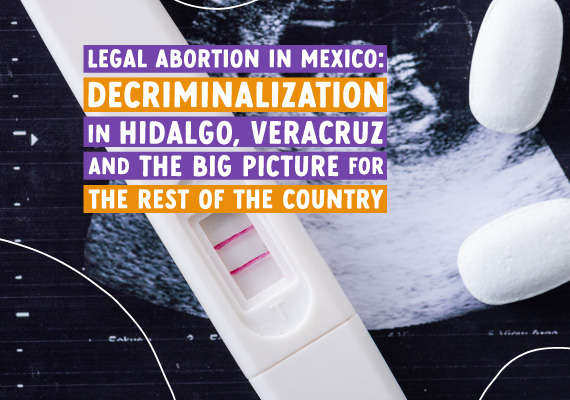 Legal abortion in Mexico: Decriminalization in Hidalgo, Veracruz and the big picture for the rest of the country

The decriminalization of abortion in Mexico has expanded to four states in the country: Mexico City, Oaxaca and more recently, Hidalgo and Veracruz. This is a real triumph for women and pregnant people, so that we can decide freely about our bodies without putting our health or integrity at risk.

Mexico City was the first place to make way to guarantee the sexual and reproductive rights of women in 2007, since which no single death has been registered for the legal interruption of pregnancy. However, more than 10 years had to pass to decentralize legal reforms and be able to hold the same decision in another state.

This means that in the last four years at least we have seen more than 100 initiatives taken by the different local Congresses to guarantee abortion, of which only three more states have succeeded in decriminalizing it: Oaxaca in 2019, Hidalgo on June 30, 2021, and Veracruz on July 15 of the same year.

Hidalgo is a state that for many years has been governed by one of the country's most conservative parties, that’s precisely why in December 2019 the first initiative to decriminalize abortion was rejected.

Fortunately, Hidalgo has a strong and active participation of women and feminist collectives, such as Marea Verde, who pushed Congress and rulers to see this motion turned into reality.

With 16 votes in favor, 8 against and one abstention, on July 6, 2021, the amendments to the Criminal Code and the Health Act to decriminalize abortion in Hidalgo were published in the Official State Journal. In fact, some provisions were amended and added to articles 154, 155, 156, 157 and 158 of the Criminal Code for the State of Hidalgo.

As a result, the reforms allow the termination of pregnancy until week 12, however, it should be taken into account that aborting after that period of time will be considered an offense punishable by a period of between six months and one year in prison and between 10 and 40 days of fine.

In the case of Veracruz, one of the states with the largest population and approximately 4 million 190.805 people who identified themselves as women, according to the last population census 2020 by INEGI (Instituto Nacional de Estadística y Geografía), during the past july it also became one of four states to decriminalize abortion until week 12 of gestation.

This has been a great step, as the Mexican Ministry of Health reports, of the more than 72.000 women from all states in the country who travel to the capital to access an abortion, 569 come fromVeracruz. Do you imagine the joy and tranquility they felt when they knew that access to terminate pregnancies would become legal, safe and free?

What's next for the fight for free abortion in Mexico?

While we have great reason to celebrate the breakthrough in the regulatory framework of states that have decriminalized abortion, there is actually much more to be done.

First, the work of accompanying and monitoring in health centers should become a priority, with particular emphasis in creating decent conditions for girls, adolescents, women and pregnant people who require to have access to quality and 100% safe abortions and, of course, in paying attention to the competent authorities implementing the entirely budgets designated.

Similarly, it is of the utmost importance that young people and adults, especially those who support women's rights, should form a much more critical eye and seek appropriate tools to influence public policies related to our sexual and reproductive rights. The agreement and strength of activists has served to modify laws before, that is why the secret is in the power of collectivity.

Finally, the State must guarantee the right to a legal interruption of pregnancy in the remaining 28 entities beyond causes of sexual rape, genetic alterations, artificial insemination not consented or because the pregnancy puts the person at risk of death simply because in the end, hasn't enough time passed for women in Mexico not to be allowed to decide about our own bodies?

Bio of the author: Adriana Sánchez has worked as a copywriter and web editor for various platforms in Latin America. Animal, dance and photography lover, she is interested in working on related topics about women.