Men & Abortions - A Conversation with Joe Strong from The Masculinities Project 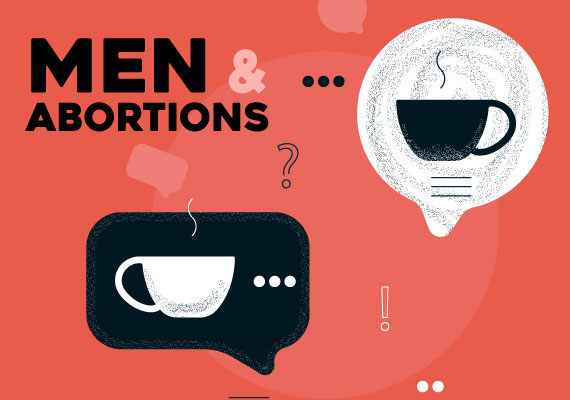 Men & Abortions - A Conversation with Joe Strong from The Masculinities Project

HowToUse had the wonderful opportunity to have a virtual chat with Joe Strong, a PhD Candidate at the London School of Economics and Political Science, and the research lead on the Masculinities Project that explore the relationships between masculinities, men, emergency contraception and abortion. The aim of this interview was to better understand the reasons why the abortion-rights movement across the world has primarily been women-led and explore ways in which men can be better, more informed abortion rights ally.

Sneha: Abortion rights has always been a woman-led movement. Men are often, if not always, left out of the abortion rights conversation. Do you see this as a possible problem?

Joe: Absolutely not! There are such important reasons why men have not been involved in the abortion rights movement. We are reminded time and time again of the ways in which involving particularly white, cis gendered men in movements can lead to their voices being heard and centred over others.

There does need to be a future envisaged that acknowledges that the systems and structures that maintain injustice do so for everyone, including men. Groups, such as SisterSong, have reminded us that Reproductive Justice requires us not only to tackle more direct reproductive health concerns, such as abortion access, but also the broader economic, social, and political environment that we live in.

Whilst the idea of men ‘leading’ a movement is unnecessary, there is no reason why men can’t engage with broader movements for justice, which includes the right to abortion.

Sneha: Do you think if men were more actively included in the abortion language within the digital advocacy space, we’d see more actively participation from men who would’ve previously felt more alienated by the movement?

Joe: Again, for me, men’s alienation isn’t really a problem. It is far more important to have gender inclusive language to acknowledge that not only cis women have abortions than it is to have language the tries to placate or make men feel included. Call me a cynic but I don’t think it’s the language in the digital advocacy space that has made men feel alienated. We should look at the language and culture that raises men and boys to see reproductive autonomy and justice as a threat to their being, when it in fact would be liberating. The onus is not on justice movements to make themselves more palatable to those who might not support them.

Sneha: What kind of evidence do we currently having about men and abortion + emergency contraception?

Joe: The evidence we have does show that men are involved in many of the steps of obtaining care: the initial decision, the ability to seek information on where to find care, and especially the financial aspects of care. So much of reproductive healthcare is inaccessible for the people who need it most, which means that women and pregnant people are pushed into involving men without necessarily desiring to, for example, in meeting the costs of emergency contraception or abortion care.

Those are some very direct ways that we have seen men’s involvement. There are also indirect ways. To give an example, evidence from around the world reminds us of the precarity and vulnerability because of social and economic systems.

Just taking economics as an example, whilst recognising that of course it intersects with social, political, and cultural factors. In many contexts, cis men have greater access to work and capital than women, non-binary, and trans people. Where the resources are explicitly tied to expected notions of good parenting – sending your child to school, feeding them, clothing them – the threat of abandonment during pregnancy is more than just the loss of a co-parent. It can completely destabilise a person’s ability to parent.

We have seen in evidence that abandonment or ‘rejection’ of a pregnancy by a partner can make a pregnancy no longer supportable and, therefore, be part of a decision-making process towards abortion. This is an issue of Reproductive Justice, thinking back to SisterSong! Not only should absolutely anyone be able to get an abortion of their choosing for any reason, but everyone should live in a world where that choice is truly a free one, not defined by our capitalist, sexist structures.

Sneha: It sometimes feels like a loaded topic - men’s inclusion in abortion rights - what factors have you found to be important when thinking about men's involvement in abortions?

Joe: Yeah, it definitely is a loaded topic, and let’s call a spade a spade – men have not been historic allies in the fights for Reproductive Justice.

Men need to recognise and acknowledge that the patriarchy does not work for them. It’s a fantasy and it is oppressive. As well as being active listeners in conversations on Reproductive Justice, listening to what work needs to be done, men can actively engage in dismantling and reshaping our society on a broader level. I’ve tried to talk about the fact that abortions are dominated not just by individual decisions but also these broader economic, social, political, and cultural systems. Men can work with social justice organisations and help be the change we need.

So, I think that when we think about men’s involvement in abortion, we shouldn’t just think about whether some guy has been supportive to a person. Sure, that’s important. But we should be thinking about men’s involvement in the power systems that shape abortion access, and how they can address these. Start small – friendship groups, local communities – if you’re a man, use your privilege to call in your friends, families, local politicians, etc.

Sneha: I read this somewhere and it’s always stayed with me - the sentence read something like this - “if motherhood is a choice, so is fatherhood” - What do you make of this? I’m genuinely interested in knowing your thoughts on this “slogan”

Joe: Fatherhood should absolutely be a free and autonomous choice. Reproductive Justice is the framework that takes us to the place where people are able to choose whether to parent, when to parent, and how to parent. That includes men. Of course, that doesn’t negate the fact that a pregnant person has the ultimate control over their body and their pregnancy throughout gestation.

Is fatherhood really a choice in our current world, that is so steeped in patriarchy and control? Do all men who are fathers really feel they had a choice; do men (for example, queer men) whose pathways to fatherhood are often limited or blocked altogether, have a choice? If fatherhood is the concern, fine, but if fatherhood is a proxy for controlling women and pregnant people’s bodies, I’ll fight you every step of the way.

Sneha: How can cis men, in simple ways, be an abortion rights ally?

Joe: I’m reminded of a talk I once went to by the incredible Professor Akosua Adomako Ampofo. In response to questions about how to tackle racism in universities, she responded “just go and do the reading”. I think that’s a great start! There are so many fabulous people writing on reproductive justice – head over to the SisterSong website for a start, or see what organisations are working in your local area.

Listen to the amazing work happening around you (it will be there!) hold space for when those activists, advocates and reproductive justice organisations and movements need you to step up. If you are someone who has lots of friends who are men, you can call them in and talk to them about the importance of supporting and respecting the reproductive rights, choice, and autonomy of others, without conditions.

Donate. Words cannot describe how horrendous it is to know that women and pregnant people all over the world are being forced to give birth because organisations don’t have the funds to support them. Look at https://www.womenonweb.org/en/ and https://womenhelp.org/ for starters.

Sneha Nair is the Global Communications Officer at howtouseabortionpill.org. She lives in Mumbai with her four house plants.