Morality and Abortion in India 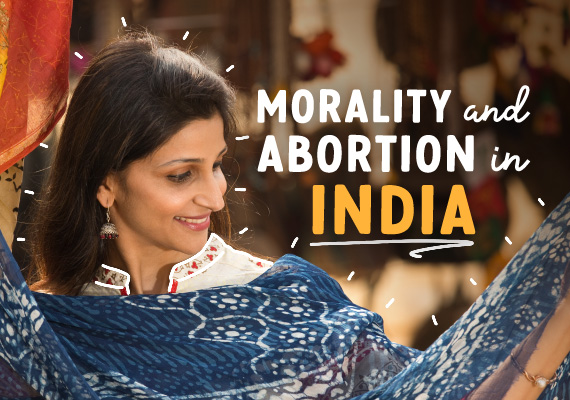 Morality and Abortion in India

Abortion rights activists rally in front of the US Supreme Court in Washington, DC, on May 21, 2019. (Andrew Caballero-Reynolds/AFP via Getty Images)

It should not come as a surprise to us when we talk about morality and abortions. Since ages, women and other abortion seekers have been shamed into accepting the cell that they carry in their body, regardless of how it was conceived. The State, religion, media, and society, all have come together in telling pregnant people how having a child is a boon and aborting a fetus is the same as killing a person. In most cases, pregnant people are shamed and guilted into accepting to have the child, more so often pulling up the rights that the ‘fetus’ has, but clearly denying the rights of the person who is pregnant.

Under the Medical Termination of Pregnancy (1971) Act which was also recently amended (March 2021) makes abortion legal up to 20 weeks and 24 weeks for special categories such as rape and incest survivors. There is approval of one doctor necessary up to 12 weeks, where if the gestation period has crossed more than that, it requires the approval of two doctors. In case of fetal disability, there is no upper gestation limit.

If abortion is legal and there are legal rights in place, then why do approximately eight women in India die of unsafe abortion related complications in India every day? Well, the answer lies in ‘morality’ and the moral ground of the health care practitioners.

The Pro-Life and Pro-Choice Debate:

The world has been divided into these two sections of people since time immemorial. Where Pro-Choice people believe that every one has the right to choose when they want to have children; pro-life people are the ones who are against abortion. Something interesting to note here is that, the life that the latter is interested in is the fetus and not the pregnant parent carrying it.

Most, but not all, healthcare practitioners take up the role of pro-life. Anytime a pregnant parent enters the medical chamber to seek abortion, they are told that it is ‘God’s miracle’ and they should not ‘kill’ a child. Pro-life people do not even believe that people should have access to contraception.

Seeking abortion is more than protecting the rights of a fetus. There are various circumstances under which people may want to take the road of abortion. It gives absolutely no one the right to decide on behalf of the person who is carrying the fetus. This is what the Pro-Choice section of the society have been advocating for. To give birth or not, the decision should be of the person carrying the child. There has to be an acceptance towards the autonomy of the person on its body. But sadly, that’s not the case.

The morality of abortion starts with morality of sex. Sex is a taboo topic and therefore everything related to it, including contraception and abortion becomes tabooed. Most pregnant people do not even have the knowledge that they can walk into a medical facility and ask for abortion, if the fetus is in the gestation of 20 weeks and the person is of legal age.

Sex is seen as an activity, only to be indulged if a person is ready to reproduce. This arises due to the lack of sex education in schools. In India, it is a rarity if the schools have a session devoted to understand about sex and reproduction. Sadly, even if that space is provided, it is often used to scare the youth and spread myths and morality barriers on abortion.

It is often more difficult for unmarried people. The moral judgement of having sex outside marriage often forces people to get abortion in unsafe and unhygienic places. This becomes even more difficult for people below the age of 18. The Age of Consent in India is 18 years, which makes any one below that age unreliable to provide consent. In such a circumstance, when cases of abortion come up, a guardian has to be present, and a rape case has to be filed. More often, in the name of ‘family honour’ and to protect the identity of the person, abortion is conducted in unsafe places, using minimum technology and no medical supervision.

The real problem lies in the lack of conversation around sex. As sex is a tabooed subject, anything related to it automatically becomes taboo as well. It is important to reduce stigma around the word ‘sex’ and increase sex education. More importantly, it is important to acknowledge the use of contraceptives and the freedom for pregnant people to make their own decisions when it comes to family planning.

Bio: Nayonika is an outspoken young woman currently working for the social enterprise. With a passion for social justice, gender equality and empowering the girl child, Nayonika collaborates with various organisations to expand her vision.