Reasons why we should all be pro-choice 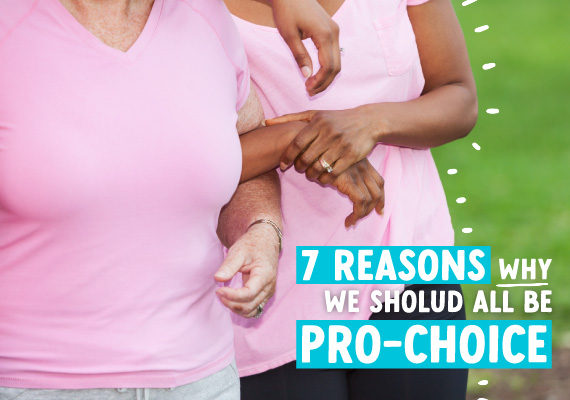 Reasons why we should all be pro-choice

In any part of the world, abortion is one SRHR topic that remains a controversial one for reasons ranging from religious to moral or even political beliefs. This is not any different in Nigeria; if anything, the topic receives way more opposition than any other one I have ever had the opportunity to discuss with people about. The very mention of the word is enough for eyebrows to be raised and walls of defense made from bricks of some of the reasons already listed above as many are unyielding and unwilling to have a change of mindset.

In the discourse of abortion, history has separated people into two categories; the Pro life and the Pro-choice. Simply put, they are defined as opposed to abortion and favoring the legalization of abortion respectively. Come with me as I give a broader perspective of both sides of the coin; what they believe in and how they arrived at it

PRO-LIFE: Viewing from the perspective of human rights, people who are pro-life belief that the fetus has just as much legal rights as the mother. This stems from the belief that the fetus is a human being (because they believe that human life begins at conception i.e fertilization of the ovum or egg); this is a bit of a grey area as some other schools of thought believe that pregnancy does not begin until after implantation. Pro-lifers believe that abortion is the taking of human life while not giving any allowance for whatever circumstances that might surround the initiation of the pregnancy (e.g. rape), physical and mental health of the woman, fetal impairments. They also fail to put into consideration other factors such as the readiness of the woman in question to carry a child, economic conditions that potentially makes the mother incapable of catering for the welfare of the child after it is born, career goals of a woman and how an unplanned pregnancy could get in the way and so on. Some of them even see pregnancy as “a grand punishment for having sex” and so insist that every woman who gets pregnant must have the baby whether or not she wants to

PRO-CHOICE: In terms of sexual health, pro-choice is defined by giving individuals the opportunity to make their own choices about sexuality, relationships, contraceptive use and reproduction including abortion. It means that they respect the right of an individual woman to make an informed choice, if faced with an unplanned pregnancy with options of choosing to continue with the pregnancy and either keeping the child or putting it up for adoption as well the choice to access free, legal, confidential and safe abortion.

Viewing from the perspective of human rights, people who are pro-choice believe that the fetus is only a potential human being and that whether or not it becomes one is heavily dependent on the woman carrying it therefore its basic rights belongs to her. They believe that everyone has the basic human right to decide whether they want to have children and when they want to have it. Contrary to general believe, being pro-choice allows that someone can be personally opposed to abortion or feel uncomfortable having one herself but would only not impose his or her moral, personal or religious views unto other women; e.g. seeking laws that reduce or restrict women’s access to abortions or judging women for their decisions.

In this article, I aim to convince you to become pro-choice if you aren’t one already -

Nigeria is a secular state (at least in theory) which means that the country is supposed to be officially neutral in matters of religion, supporting neither religion nor irreligion however, we find a lot of our laws including abortion laws still being influenced by religious and personal believes. If we must move forward from here, we need to be able to set aside our personal boundaries in order to make laws that logically benefits the individuals directly involved, and is of tremendous benefit to the country at large.

Bio - Ashade Itunu is doctor-in-training in Nigeria who is deeply passionate about sexual and reproductive health rights and advocacy as a vital component in achieving holistic health.